In this module, we will discover that the relationship between language and culture is so significant that we can come to consider them as a whole. As the professor, emeritus of ESL at San Francisco State University H. Douglas Brown stated, “A language is a part of a culture and a culture is a part of a language; the two are intricately interwoven so that one cannot separate the two without losing the significance of either language or culture”.

Language and culture are inseparable things and therefore inclusion of cultural components throughout a language learning process is something indispensable. The question is what kind of cultural elements we can include or exclude.

In this module, we will deepen the concepts of culture, language, cultural interpretation and combining language and culture learning in an adult education context.

There are different interpretations of the concept of culture.

We can image culture as a wheel, composed by MATERIAL and NON MATERIAL elements –as we have  defined before, tangible and intangibl– all the physical objects, resources and spaces are part and define the culture of a determined group of people. Material culture includes homes, schools, places for worship, clothes, utensils, roads, decorations, tools, goods and products, etc.

On the other hand, non-material culture means beliefs, values, rules, ethics, literature, arts, traditions, social roles… everything that is not physical, that cannot be touch. 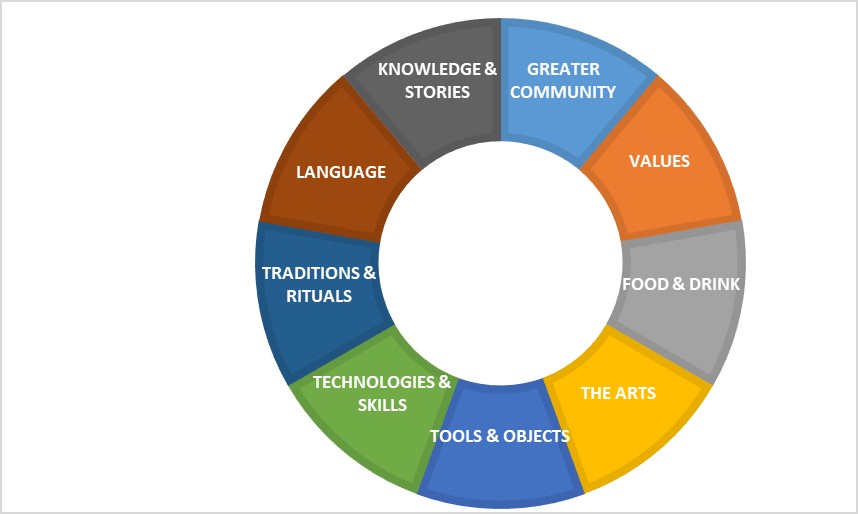 We can think on culture as a rotating wheel full of elements which are interrelated and can change through time. Culture is evolving continuously. Language is an important cultural element, and its rules of speaking and writing vary even within a same culture. Certain expressions can be special of a particular geographical or social area and can change from one place to another, even if they belong to the same language.

According to the anthropologist Edward T. Hall, culture can be described as an iceberg.

As known, the top of the iceberg we can see it is just a little part of the entire piece. In the same way, when we get in touch with a new culture, we first perceive the more visible part of it: food, festivities, music, arts, games and language as well as the physical characteristics of their people, their behaviours, gender or clothes. According to Hall, as we dip below the surface, we find the 90% of the rest of the culture: on one side the “unspoken rules” like nonverbal communication, patterns of speech, the way to interact with emotions, the vision a culture has of personal and social space, behaviour, beauty, etc. On the other side, the deepest part, the “subconscious part” of the culture, which includes assumptions like the concept of self, of childhood and adulthood, of gender, sex, age, social class, time, etc.

From this underwater part of the iceberg origins the idiomatic language use, as this type of language is based on assumed knowledge.

If we think on a natural element like the sun, we can see, for example, that as in the Arab culture is seen as oppressive, especially in summer, on the contrary, in the English culture it is seen as lovely. In the same way, the proverb “Save for a rainy day!” makes sense in English but it does not in Arab because if the rain has a negative cultural connotation in English culture, it has a positive one in the Arabic. 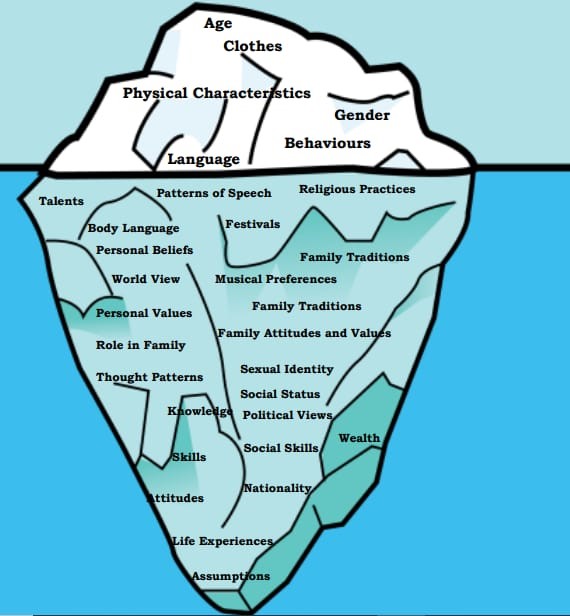 Then, it is possible to see that culture influences the vision of the world, and it also contributes to the shaping of language. Knowing the language of a people means understanding its culture and its people. Similarly, the more one imbues oneself with a people's culture, the more one improves one's linguistic ability.

Also the famous linguist Noam Chomsky explained how children first language learning is controlled by universal rules but it is a product of the social process that occurs within a community. So, keeping in memory a great stock of ready-made sentences, vocabulary, and rules is not the same as knowing how that language is used in its cultural context.

That said, it is useful to consider some things:

Never forget that language is like a mirror of its culture, it is influenced and shaped by the cultural system of values.

Culture in language learning is useful not only for a better learning of the language, due to the deeper meaning given to it, but also to promote cultural-general understanding, foster respect and discard prejudices, as well as building confidence and appreciation of the native culture.

Nowadays it is tried and tested that the foreign language learning process cannot be simplified in just memorising vocabulary and grammatical patterns. As seen, language and culture are connected and to communicate to or understand native English speakers is fundamental for learners to be immersed in the cultural context. Weaver and also Salzmann in their studies shown that the problem lies in the methods of teaching and learning English to adults: the task become difficult because it is common to isolate language from its cultural context. As children learn language in communities, learning a foreign language should consider the immersion in the cultural context. Teaching English means to get people aware of the English culture.

Below, we will learn about the best ways to teach English language considering cultural interpretation, especially in adults’ classroom.

Cultural interpretation studies postulate an analysis and interpretation of cultural representations of a determinate group of people or culture. By analysing symbols, products, stories, beliefs of a culture it is possible to interpret meanings, worldview, similarity and diversity with other cultures or sub-cultures. This work of Anthropology was also very useful for Linguistic and Philosophy to better understand languages and their meanings.

Starting from this studies, new theories entered in the foreign language teaching, as we have seen. First of all, let’s go to resume the fundamental point of the language & cultural learning approach, according to the relevant studies:

EFL _English as a Foreign Language

ELF - English as a Lingua Franca

EAL - English as an Additional Language

The English/cultural learning approach can be applied, in different ways and measures, to all categories of ELT. Anyway, when teaching English as a Foreign Language, it is important to consider that British English is not  Irish nor American English, Canadian or Australian. Whatever the English language is taught, there is always a basic reference culture. Even in the case of the ELF, it brings with it the language and culture of those who speak it. Now this is not the right place to dwell on the specific case of ELF, let’s pass to the following chapter where some ways of applying the English cultural teaching approach for adults are proposed.

How to teach culture in English classroom for adults?

There are different ways to improve the English Language Teaching considering the cultural interpretation. 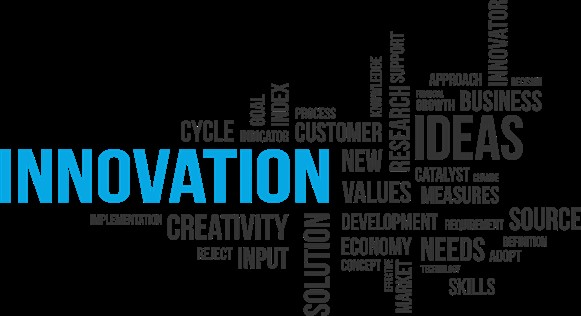 Here some proposal of activities:

Having a theme makes planning activities a lot easier and using a period in history can really help. The following is just an example that is possible to adapt to other historical period and place.

- Try to make a short silent sketch (think on Laurel and Hardy  ) using gestures. Whilst it may sound counterproductive to language learning it can show how gestures vary between countries and cultures and how body language is an important part of language exchange and understanding.

- Watch the trailer for Suffragette and try to understand why the start of the 20th century was a turning point for the rights of women in society. Start a debate about whether we live in an equal society 100 years later.

- Examine some vocabulary and idiomatic forms related with gender to understand the differences of conception regarding the gender stereotypes.

Choosing a geographical location can give plenty of scope for a range of themes. Here just an example:

- Explain that San Francisco is a unique city, very special and which architecture had been influenced by European architecture. Challenge the students to make a research about different monuments, museums or infrastructures and discover their European’s inspiration.

- Find songs with San Francisco in the title or as a subject of the song and study the lyrics. Ask students to compare songs and how they treat the city.

Most schools and workplaces in the UK still require men to wear neckties. Give one student a tie and another the instructions for four different knots and let them perfect the art of tying the perfect Windsor. Extend the activity by talking about how important or not appearance is in different walks of life.

This type of activity is really useful not only to familiarise with different English accents but also to discover how different is vocabulary depending of the country where the language is spoken. Because, as we learnt, language generates in the hidden part of the iceberg, it has a cultural root!

Show this video to the students and animate them to write down the words pronounced by the different English speakers in the video.

Give them a list of new words like that and animate them to try the different pronunciations according to the country they belong to!

Encourage others to have cultural get-togethers where you have tasting sessions of food from different places. Try making simple samosas if the topic is India or mince pies if talking about Christmas in the UK. If you find the ideas simple enough and have the equipment, try them out with your students. You can organise a practical session or give them/tell them to choose a recipe to do at home and take in the classroom. They will have to explain the food origins and the procedure to do it.

*Activities 1, 2, 3 and 5 have been adapted for the TIMELESS project from: https://epale.ec.europa.eu/en/blog/10-cultural-language-lesson-ideas

We can image culture as a wheel, composed by and elements: all the physical objects, resources and spaces are part and define the culture of a determined group of people. culture includes homes, schools, places for worship, clothes, utensils, roads, decorations, tools, goods and products, etc.

On the other hand,  culture means beliefs, values, rules, ethics, literature, arts, traditions, social roles… everything that is not physical, that cannot be touched.

We can think of culture as a rotating wheel full of elements which are interrelated and can change through time. Culture is evolving continuously. is an important cultural element, and its rules of speaking and writing vary even within the same culture. Certain expressions can be special of a particular geographical or social area and can change from one place to another, even if they belong to the same language.

Fill in the image:

2. Try to complete the image writing the VISIBLE, LESS VISIBLE AND NOT VISIBLE part of the CULTURAL ICEBERG.

3. Language rarely is influenced and shaped by the cultural system of values of the society that speaks it.

4. Culture in language learning is also useful to promote cultural-general understanding, foster respect and discard prejudices, as well as building confidence and appreciation of the native culture.

5.The problem of teaching and learning English to adults lies in a wrong method which isolates language from its cultural context

6. Cultural interpretation cannot be applied to the foreign language teaching

7. Concerning the English Language Teaching (ELT) there is only one category of teaching that is recognized

8.The English/cultural learning approach can be applied to ELF

Choudhury, Rahim Uddin, The role of culture in teaching and learning of FL (article) https://pdf4pro.com/view/the-role-of-culture-in-teaching-and-learning-of-30823e.html

Leveridge, Aubrey Neil, The Relationship Between Language & Culture and the Implications for Language Teaching (article) https://www.tefl.net/elt/articles/teacher-technique/language-culture/

Video on culture wheel as a education to Malaysian Indian community: https://www.youtube.com/watch?v=fZPVqQyixjE

Culture Awarness and Learning English as a Second Language https://www.researchgate.net/publication/290185373_Culture_Awareness_and_Learning_English_as_a_Second_Language_ESL

Adult Learners‟ Perceptions of the Significance of Culture in Foreign Language Teaching and Learning https://files.eric.ed.gov/fulltext/EJ1055148.pdf

"The European Commission support for the production of this publication does not constitute an endorsement of the contents which reflects the views only of the authors, and the Commission cannot be held responsible for any use which may be made of the information contained therein."